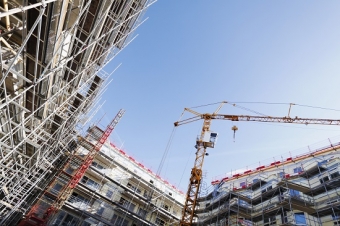 Cranes are such a beloved symbol of the construction landscape that it’s hard to believe that only 100 years ago they were predominantly used in the shipping industry. If you’re a history buff you may be tempted to believe that the Industrial Revolution of 1750 through 1900 took cranes under its wing, but it wasn’t until the tail end that cranes took a step toward becoming the engineering marvels we rely on today.

The Technological Revolution of the early 1900s is where the real fun began! The way history tells it, you might think that engineers and problem-solvers of the time glossed over the obvious by ignoring crane advancement in favor of, well, everything else. In reality they were expending energy on getting cranes off the dock and to a construction site.

The main challenge in outfitting cranes for construction was finding the strength to do so. Up until the early 1900s cranes were made from wood. You just can’t lift several tons of stone at a time to build a high-rise using a beam of wood, physics won’t allow it. As recorded by The History of Cranes, the first dock crane to be made out of revolutionary material cast iron is credited to Hick and Rothwell in 1834, almost 60 years after the first cast iron bridge was built. This new super-powered crane could lift 2 tones. While that’s not enough power needed to remove a history carcass from the shores a coastal village, it is enough to load cast iron building materials onto ships, which was necessary for the growth of industry at the time. As cranes grew stronger they also grew taller and, to the immense joy of the construction industry at large, they became mobile.

Having learned to crawl, cranes seemed to skip the walking phase, instead running to the aid of construction crews the world over. European crane builders were in hot competition to lead the way to revolution. Steam and shortly thereafter combustible engines got things really moving, but still not quite the way things move today. Rather than being capable of independent movement, these early mobile cranes were mounted on trains and boats and largely used to build transportation-related structures like bridges and railways. Consider them the mobile phones of the 1990s; amazing but the best is yet to come. Up until the early 1900s cranes were used on construction sites for foundation work. Remember that the next time you come across a century home.

Increased size, strength, and track mobility took cranes from docks and building transportation ways to lending a hand with dam construction, and finally, urban construction. By the early 1900s dockside cranes were capable of hefting up to 250 tons, and cable cranes could heave heavy duty construction materials like sand, stone, and concrete across a span of 445 meters up to 100 meters high. Industrialization brought workers inland on masse and this relocation, combine with reinforced concrete and vertical building were a really good reasons to evolve cranes for urban construction. It wasn’t until the 1920s that cranes jumped off of tracks and onto solid ground, but that’s a post for another day!

WrightPlan is proud to add to the growing history of the crane and rigging industries. Find out how our quoting, dispatch mobile APP software can make redundancy a thing of the past. Call us to learn more at 1-519-489-2320.